To: All Branches and Reps, SWT


After many years as ASLEF’s representative on the South West Trains Pension Committee, Bro Charley Martin will be retiring from the role.

I would like to put on record our thanks for the brilliant work he has done in representing ASLEF members and safeguarding their pensions.

The Executive Committee has decided that Bro M Prenter, Waterloo Nine Elms Branch will be the new ASLEF nominee on the committee.

Please bring this to the attention of your members. 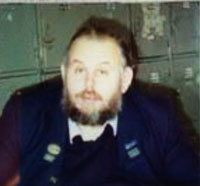 It is with sadness we report the passing of retired Woking driver Anthony Morton.
Rocker(to those who knew him) passed away after a short illness on 26th February 2016.
Rocker retired in 2011 after serving just short of 50 years on the footplate.


The Wloo&NineElms Ldc have been in negotiation for some months to negate the affects of a four-day week with regards to permanent changeovers.
A trial period for the May to December roster period has been agreed.
The details will be hammered out tomorrow by your Ldc.
If the benefit to us as drivers is as we believe, details will be published on this forum, on the Wloo FB site and posted in the drivers room.
Article first added on : Thu, 14 Apr 2016 22:28:38 +0100
....... Final update on : Thu, 14 Apr 2016 22:28:38 +0100


To All Waterloo Drivers

Exchange of Duties – Trial
Hello All,

After working together with the Local Driver Reps, we have arranged for a Trial of a revised Exchange of Duty process at Waterloo. The details are as below:

1 Drivers who wish to exchange duties will be able to apply and will only need to do so once before each roster period. This application must be received in writing/via email at least 14 days prior to the roster start date and be received from both parties – The Depot Manager will confirm agreed via email/writing. However for the May 2016 roster - by the 03rd May 2016 to the Depot Manager and the application must detail the 2 Drivers concerned and which turn (Early or Late) they wish to swap onto.

2 Both drivers applying will need to be productive at time of application.

3 If any of the 2 drivers wish to subsequently cancel the arrangement, this must be received in writing/via email 14 days prior to any 8 week PA to the Depot Manager.

4 The trial runs during the May 2016 to December 2016 Roster. There will be a review held during the latter part of the roster period and the result of this will be communicated to drivers on whether the trial has been deemed a success or not.

5 Any mutual exchange of duties drivers will be rostered after all drivers shown as spare on the base roster have been booked in line with the agreed method of booking at the depot (nearest the turn at Waterloo).

6 A driver swapping onto Early Turn will be booked any turn of duty (Waterloo as a preference) that signs off by 1830 (before all other AO). Where there is no turn available the driver will be shown as AO signing on at 0600 with a length of duty of 08hrs 45mins.

7 A driver swapping onto Late Turn will be booked any turn of duty (Waterloo as a preference) that signs on or after 1030 (before all other AO). Where there is no turn available the driver will be shown as AO signing on at 1500 with a length of duty of 08hrs 45mins.

9 In the event of a driver leaving service/being permanently removed from driving the exchange will cease at the next PA or roster change.

10 When one of the drivers is on Annual Leave then the exchange will still be granted.

11 DRI T&C apply in all cases – unless detailed above.

If you wish to benefit from this arrangement then please email as per 1 above, and I will confirm with CRO the arrangements. My email address is caddy@swtrains.co.uk

Thank you all for your continued professionalism and speak soon.


Further to receipt of a report from the District Organiser, members are advised that Free Day working has been reinstated until 28th May 2016.


The result of voting was as follows: -

Question: Do you accept the South West Trains 2016 pay offer?


This Saturday, Dulwich Hamlet are entertaining Bognor Regis Town at their Champion Hill ground. The match is being sponsored by ASLEF in order to raise funds for the International Brigade Memorial Trust. We will be meeting in the Cherry Tree Pub (which is just outside East Dulwich railway station) from 13:00. Admission is just £4 on production of a trade union membership card. Kick off: 3 o'clock. 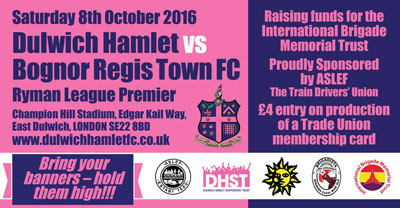 
At the September branch meeting, A. Holloway stood unopposed and was duly elected as the official ASLEF Waterloo Nine Elms branch candidate for Waterloo drivers LDC. The term is for three years commencing 1st of January 2017.

To read the election address of A.Holloway, click here